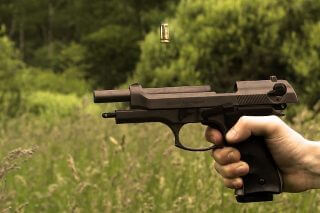 Merriam-Webster’s definition seems so simple for such a hotly contested topic. In 1994, a federal assault weapons ban was passed as part of the Violent Crime Control and Law Enforcement Act. Senator Diane Feinstein, CA, introduced the 1994 ban in 1993 as an amendment to the crime bill written by then-Senator Joe Biden, DE. The bill eventually passed by a one vote margin in the Senate and by a two vote margin in the House on September 13, 1994, and it was signed into law by President Clinton that same day. The 1994 Act’s primary purpose was to reduce crime, but Senator Feinstein’s amendment defined what constituted an assault weapon and what was prohibited. The 1994 Act prohibited the sale and manufacture of:

(i) a folding or telescoping stock;

(ii) a pistol grip that protrudes conspicuously beneath the action of the weapon;

(i) an ammunition magazine that attaches to the pistol outside of the pistol grip;

(iii) a shroud that is attached to, or partially or completely encircles, the barrel and that permits the shooter to hold the firearm with the nontrigger hand without being burned;

(iv) a manufactured weight of 50 ounces or more when the pistol is unloaded; and

(v) a semiautomatic version of an automatic firearm; and

(D) a semiautomatic shotgun that has at least 2 of–

(i) a folding or telescoping stock;

(ii) a pistol grip that protrudes conspicuously beneath the action of the weapon;

(iii) a fixed magazine capacity in excess of 5 rounds; and

(iv) an ability to accept a detachable magazine.

The 1994 Act, contained a clause that caused the ban to expire after ten years unless Congress specifically reauthorized the ban. Polls showed that 68% of Americans and 32% of N.R.A. members supported renewing the assault weapons ban. However, since the expiration of the ban in 2004, there have been several attempts to renew the assault weapons ban, led by Representative Carolyn McCarthy, NY, and Senator Feinstein, but their proposals never got out of committee.

The last year has brought the issue of assault weapons back to the forefront of political debate. As a country, we have witnessed the devastation brought upon by those who used firearms in the Aurora Theater and Sandy Hook shootings. James Holmes, the Aurora Theater shooter, and Adam Lanza, the Sandy Hook shooter, both allegedly used an AR-15 semi-automatic assault rifle in their rampages. Had the assault weapons ban been renewed, the AR-15 may have been more difficult for Holmes to purchase.

The nation must ask what is the best way to protect our citizens so that we may avoid tragedies such as Aurora and Sandy Hook? These tragedies have many politicians and constituents calling for stricter gun restrictions while just as many politicians and constituents argue that banning assault weapons are not the answer. But is it really just about guns? Aren’t there more factors to consider than just trying to restrict access to certain weapons? Along with calls for a renewed gun ban, there have been allegations that the real issue is mental health.

Senator Feinstein has recently introduced another bill to Congress which would call for a ban 150 assault weapons. Natuarlly, Second Amendment avocates are angered by Feinstein’s proposal. President Obama and Vice President Biden both have focused their attention on more comprehensive background checks and kick starting the ATF which has not had a Director in several years.

In today’s society, Americans seem more desensitized to guns and the potential danger they pose because of the pervasiveness of firearms in America’s history and culture. Hollywood and videogame makers have shared some of the criticism, but everyone is pointing a finger at each other. No one wants to take responsibility. Count me as curious to see how the Obama administration and Congress find middle ground to resolve these explosive issues.