Dumb Starbucks: Who’s the “Dumb” One? 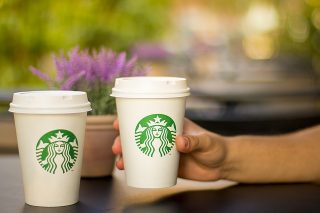 On Friday February 7, 2014 a mock coffee shop parodying Starbucks Coffee opened in Los Feliz, California under the name “Dumb Starbucks Coffee.” Although the store considers itself an “art gallery,” the store offers various coffee drinks such as a “Dumb Frappuccino,” a “Dumb Blonde Roast,” and a “Dumb Iced Coffee.” The store even displays fake CDs (which apparently are not for purchase) including the album “Dumb Jazz Standards.” See Photo Here: https://twitter.com/dumbstarbucks/status/432213809315315714/photo/1.

Not surprisingly, Starbucks Corporation has taken note of this operation and sent a cease and desist letter to the Los Feliz coffee shop under the grounds that the coffee shop is infringing on Starbuck’s trademark. “Dumb Starbucks” defends its operation on the notion that is operates within the exception of trademark infringement by virtue of “parody law” or “fair use law” protected by the First Amendment. See the Coffee Shop’s Legal FAQ Here: https://twitter.com/dumbstarbucks/status/432213809315315714/photo/1. See the YouTube video of owner Nathan Fielder and how he defends the use of the name “Dumb Starbucks.”

The classic “Fair Use” defense forbids a trademark registrant (in this case, Starbucks) to appropriate a descriptive term for its exclusive use and so prevent others from accurately describing a characteristic of their goods. As an example, this would be like Starbucks preventing someone from creating and selling a currency called “starbucks,” used by celebrities or “stars.” Clearly, this is not what is going on here. However, when a defendant uses a trademark not in its primary, descriptive sense, but rather in its secondary, trademark sense, the nominative fair use analysis applies. This defense is available when a defendant (in this case, “Dumb Starbucks”) uses a trademark to describe the plaintiff’s product (e.g., for purposes of comparing its own product to plaintiff’s product), and the defense applies only if “the use of the trademark does not attempt to capitalize on consumer confusion or to appropriate the cachet of one product for a different one.” The New Kids on the Block v News Am. Publishing, Inc. (9th Cir 1992) 971 F2d 302, 307. Since “Dumb Starbucks” is allegedly parodying Starbucks, the test set forth in New Kids is applicable to this situation.

In New Kids, the Ninth Circuit stated the three requirements of the nominative fair use defense (971 F2d at 308): (1) the product or service in question must be one not readily identifiable without use of the trademark; (2) only so much of the mark or marks may be used as is reasonably necessary to identify the product or service; and (3) the user must do nothing that, in conjunction with the mark, would suggest sponsorship or endorsement by the trademark holder. In the New Kids case the defendant, a mock band, lost on this defense as the defendant displayed the words “Beach Boys” more prominently than the words “Family and Friends” suggesting sponsorship by the Beach Boys. Id. The court also held that the mock band caused consumer confusion as to who would be performing on a particular day. Id.

Does “Dumb Starbucks” have a good case?

Based on the test set forth above in New Kids, no. Looking at the logo of “Dumb Starbucks” compared to the logo of Starbucks, one can see little difference, if at all. In considering similarity, courts examine the marks’ similarity in sight, sound, and meaning. SeeDreamwerks Prod. Group, Inc. v SKG Studio (9th Cir 1998) 142 F3d 1127, 1130. Here, while Dumb Starbucks added the word “dumb,” the color, size, and font of the word “dumb” is the same as all the other words, thereby making the difference between the two logos negligible. While “Dumb Starbucks” totes itself as an “art gallery” on the one hand, the coffee shop also says that it is a “fully functioning coffee shop” on its Legal FAQ. Moreover, the fact that “Dumb Starbucks” will soon be selling its coffee to consumers also raises some concerns as to whether or not the coffee shop will be “appropriating the cachet” of Starbucks Coffee. Be the judge and view photos of “Dumb Starbucks” at:http://www.usatoday.com/story/blog/nation-now/2014/02/10/dumb-starbucks-parody-free-coffee/5357597/.

DISCLAIMER: Dumb Starbucks may actually be a comical stunt made by comedian Nathan Fielder, but Dumb Starbucks does make for a great blog on trademark law.