Johnny Football and the NCAA 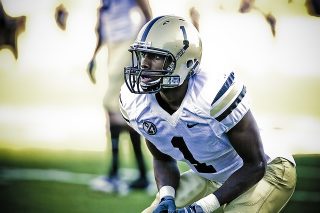 Devising a system for student athletes to participate in collegiate sports while preserving a healthy pedagogical atmosphere has been a difficult balancing act for the National Collegiate Athletic Association (NCAA). Specifically, the distinction between an unpaid amateur sportsman and a paid professional player has raised criticisms against the NCAA’s multibillion dollar venture. Today, one college athlete is making headlines in his attempts to skirt around the NCAA’s distinction through the use of clever legal avenues.

That person is twenty year old Jonathan Paul Manziel, a sophomore business student at Texas A&M. Since his immediate recruitment out of high school in 2011, Manziel has risen to stardom as quarterback for the Aggies. During his freshman year, Manziel broke Archie Manning’s forty-three year old total offense record, then broke his own record, becoming the first player in Southeastern Conference (SEC) history to have two 500 plus yard total offense games in a single season. Manziel’s impressive accomplishments earned him the 2012 Heisman Trophy as well as the Davey O’Brien Award, two of the most prestigious awards in collegiate football. His rise to prominence earned him the nickname “Johnny Football“, the subject of Manziel’s litigation.

For the past 100 years, the NCAA has opposed the idea of sharing revenues with its student-athletes. The organization has never legally treated the students as employees in any capacity, nor have players organized to represent their interests collectively. NFL and NBA athletes are represented by Player’s Associations and other organized bodies dedicated to negotiating collective bargaining rights, prosecuting grievances, and counseling players on benefits and opportunities. Conversely, student-athletes receive no such representation.

Currently, the NCAA requires an “Amateurism Certification” designed to “ensure that NCAA amateurism regulations are applied uniformly” to all student-athletes. Article 12.01.1 of the 2012 NCAA Operating Bylaws states that “Only an amateur student-athlete is eligible for intercollegiate athletics participation in a particular sport.” According to 12.1.2, “An amateur athlete may loses amateur status. . . if the individual (a) Uses his or her athletics skill (directly or indirectly) for pay in any form in that sport; (b) Accepts a promise of pay even if such pay is to be received following completion of intercollegiate athletics participation; (c) Signs a contract or commitment of any kind to play professional athletics, regardless of its legal enforceability”. A “Professional Athlete” is defined under 12.02.3 as “…one who receives any kind of payment, directly or indirectly, for athletic participation, except as permitted.”

On February 2, 2013, Manziel filed papers with the U.S. Patent and Trademark Office to trademark his newly dubbed nickname, “Johnny Football.” Thirteen days later, Manziel filed a complaint in the Eastern District of Texas, Tyler Division, on behalf of his father’s corporation, “JMAN2 Enterprises, L.L.C.” against Eric Vaughan for selling t-shirts on www.keepcalmandjohnnyfootball.com reading “Johnny Football.” See JMAN2 ENTERPRISES, L.L.C., vs. Vaughan, (Feb. 15, 2013, Case No. 6:13-cv-00158-MHS). A second complaint was filed on March 1, 2013, against Kevin Doolan of CubbyTees.com for his involvement with selling T-shirts for $19.99 reading “Johnny Football” and “Johnny Heisman.” See JMAN2 ENTERPRISES L.L.C., vs. DOOLAN, (Mar. 1, 2013, 6:13-cv-00215-MHS). According to Manziel’s attorney, defendants are accused of trademark infringement under the Lanham Act, and Texas unfair competition, including right of publicity, palming off and misappropriation. JMAN2 Enterprises is asking the court for injunctive relief and an award of damages for the unlawful sale. However, the real issue does not center on whether an infringement actually occurred; instead, the controversy surrounds a student-athlete’s ability to profit from his/her involvement in amateur sports.

Manziel cannot profit from his corporation “JMAN2 Enterprises, L.L.C.” until his NCAA eligibility has expired, or he leaves after next season to head to the NFL draft. However, Manziel can take action to further his claim of trademark ownership in the phrase “Johnny Football.” Apparently, the NCAA has ruled that student-athletes may retain winnings from such lawsuits especially given that the trademark “Johnny Football” is separate from the university. According to A&M’s vice president for business development, “The NCAA specifically said Manziel has a right to keep any winnings from a civil proceeding as a private entity, but if it was an orchestrated event enabling a cash flow to the student-athlete, that would be a violation of NCAA rules.”

Manziel is not the only aggrieved party filing suit to recover monetary compensation. In 2009, former UCLA basketball player Edward O’Bannon filed a class action lawsuit on behalf of former NCAA student-athletes against the NCAA for unlawful use of class member images. The complaint sought unspecified damages, injunctive relief for violation of the Sherman Anti-Trust Act, and unjust enrichment from licensing revenues. Plaintiffs also sought injunctive relief to gain the right of control of their image and likeness. See O’Bannon v. NCAA, 2010 U.S. Dist, LEXIS 19170 (N.D. Cal. July 9, 2009). Professor Michael McCann, one of the nation’s leading sports lawyers said, “If O’Bannon and former student-athletes . . . receive a favorable settlement, the NCAA, along with its member conferences and schools, could be required to pay tens of millions, if not hundreds of millions, of dollars in damages—particularly since damages are trebled under federal antitrust law. The marketplace for goods may change as well, with potentially more competition over the identities and likenesses of former college stars.” William D. Holthaus, Ed O’Bannon v. NCAA: Do Former NCAA Athletes have a case Against the NCAA for its use of heir Likenesses?, 55 St. Louis U. L.J. 369, 371-72 (2010). The next hearing in the pending O’Bannon case is set for June 20th, 2013.

The NCAA has been notorious for making other questionable decisions punishing student-athletes for violating the operating bylaws. For example, in 2002, infamous Ohio State running back Maurice Clarett was dismissed from college after allegedly accepting thousands of dollars in improper benefits and then lying to the NCAA and school investigators about the supposed benefits. Clarett, who came from an impoverished background soon found himself ineligible for the NFL draft due to his young age. A lawsuit was filed against the NFL challenging the mandatory three year post-high school waiting period, which Clarett initially won, but later lost on appeal in the United States Court of Appeals for the Second Circuit in an opinion by Justice Sonia Sotomayor. Clarett v. NFL, 369 F.3d 124 (2004). Clarett’s discharge from school effectively set in motion the downward spiral that started in cumbersome litigation, and resulted in the young athletes reversion to crime and ultimately conviction.

Similar to Clarett’s controversy, Mike Williams from the University of Southern California hired an agent and presented himself as a candidate for the NFL draft after his sophomore year in college once he heard about the lower court’s ruling in Clarett’s case. By then, Williams had already earned the Freshman of the Year award in 2002 and was a prime candidate for the Heisman Trophy in 2004. However, once the Court of Appeals reversed the lower court’s ruling, the NCAA deemed both Clarett and Williams ineligible to play, forcing them to sit out the entire 2004 football season, including practice.

Furthermore, in 2009, Terrelle Pryor of Ohio State’s Buckeyes’ faced suspension and was later sidelined for his first five NFL games for selling his jersey, ring, and other memorabilia and for exchanging autographs for free tattoos. The decision became highly controversial as NFL commissioner Roger Goodell authorized himself to preside over collegiate improprieties. Pryor eventually pulled out of Buckeyes’ football his senior year citing “the best interests of [his] teammates” as his basis.

Whether Manziel has discovered the hidden loophole to uncovering student-athlete compensation remains to be seen. The fact that colleges operate a multibillion dollar sports industry should raise an eyebrow as to the NCAA’s business dealings with its players. At the same time, students are enrolled in college for the purpose of learning, enlightenment, and enrichment of the mind. While it is hard to argue that college athletes are not recruited by schools for any purpose other than athletic brilliance, it is equally hard to argue for student-athlete pay, in light of purity of amateurism and the already existing tuition benefits. For the moment, the NCAA is closely watching Manziel’s lawsuit for any possible infringement on NCAA operating policy.